Art Unit 2138 has issued patent applications for "Computer Architecture, Software, and Information Security: Memory Access and Control" at a clip of 87.5% (1626 out of 1859 cases) post-Alice. 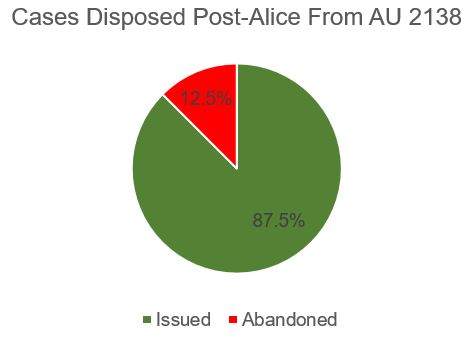 That said, are applicants ALWAYS able to survive AU 2138? Not quite. 4.4% (82 out of 1859) of AU 2138 cases finally disposed post-Alice had at least one Request for Continued Examination (RCE) but were still abandoned. Yes, that means 95.6% of cases in AU 2138 were either issued, or the applicant gave up in the first round of prosecution. 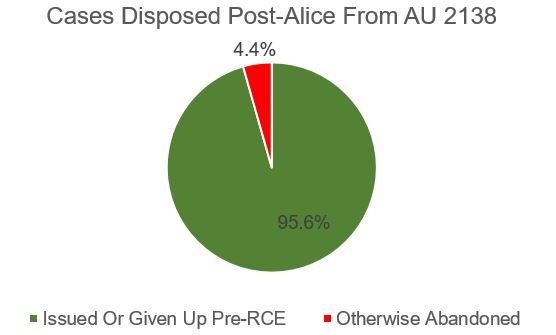 Taking a slightly different approach in comparison to my previous post on how to successfully navigate AU 3689, I hope to explain or at least hypothesize in this post how the remaining 4.4% of applications became abandoned in AU 2138 post-Alice. Where did it go wrong? Here are some data-driven tips to avoid the identified pitfalls. 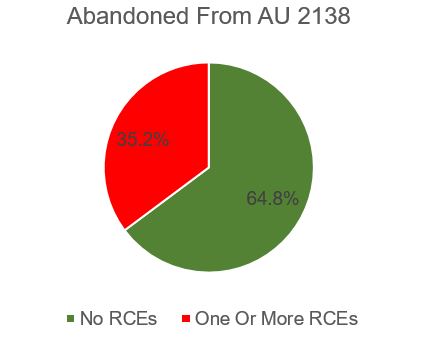 To be fair, some of the abandoned cases without RCEs may still have been abandoned after RCEs were filed. Only 25.2% (410) of the grants required even one (or more) RCE, and the average number of RCEs filed per granted case was 0.34. If you consider only those cases where at least one RCE was filed, your overall allowance rate in AU 2138 drops from 87.5% overall to 83.3% (410 out of 492) if you reach the first RCE. I think most financially able applicants would take an 83.3% allowance rate, considering it still exceeds the average at the USPTO, even for newly filed cases. 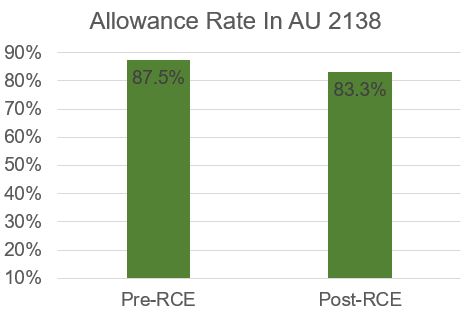 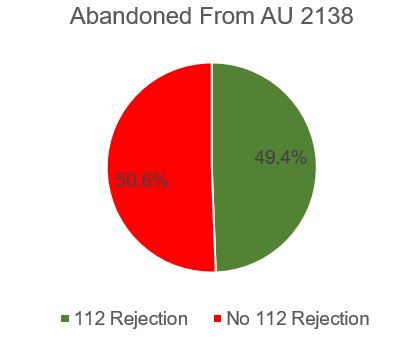 In other words, applicants who abandoned cases in AU 2138 frequently did not adequately describe, enable, and clearly claim their inventions. This issue is usually avoidable by careful patent drafting, and USPTO applicants generally do avoid this issue. As explained by James Cosgrove in 2017, 112(a) rejections are avoided by applicants 88.3% of the time across the USPTO, and 112(b) rejections are avoided 78.8% of the time.

98.8% (1837) of cases in AU 2138 were issued, did not have an RCE, or had a 112 rejection, leaving only 1.2% of cases without any of these characteristics. In other words, only 9.4% (22) of the abandoned applications included at least one RCE without any 112 rejections. Does that mean applicants are always able to wear down examiners in AU 2138 for well-written specifications and carefully crafted claims? Still not quite, but what happened to these 22 remaining cases? 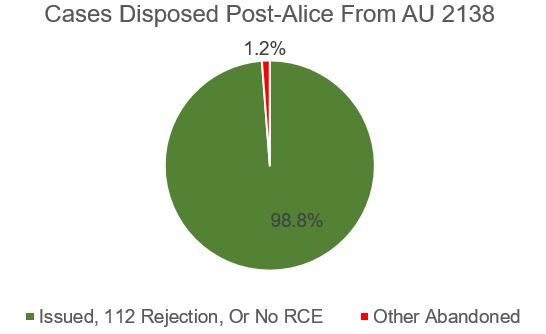 4. Be Willing To Pay The Issue Fee

Of the 22 (1.2% of the total) remaining cases with at least one RCE and no 112 rejections, two were actually allowed by AU 2138. The applicant simply did not pay the issue fee after the examiner sent the Notice of Allowance.

5. Don't Try To Patent The Same Thing More Than Once

Of the 20 (1.1% of the total) remaining non-allowed cases with at least one RCE and no 112 rejections, 6 received an obviousness-type double patenting rejection on the first office action. This means that the claims in the abandoned case were likely not patentably distinct from claims that had already issued in another patent owned by the applicant. In other words, the applicant already got the relevant patent rights.

6. Be Careful With Foreign Priority Documents And Provisional Applications

7. Do Not Pursue Unreasonably Short Claims

Of the 8 (0.4% of the total) remaining never-allowed cases with at least one RCE, no 112 rejections, and no potential provisional or foreign priority issues, 4 were filed with claims of less than 75 words in length. As explained in my post about extremely short patent claims and the corresponding IPWatchdog post, there is roughly a 0% chance of allowance for a software-related patent application claim of less than 75 words. Not only that, the strategy of filing extremely short patent claims in the software space results in longer prosecution and narrower claims.

8. Avoid 112 Issues That Steer Your Claims

Three out of the four remaining cases had 112 issues that did not show up as 112 rejections. These issues likely steered the claims and arguments into uncomfortable territory for the applicant.

Case A had an interview summary immediately prior to abandonment where the examiner objected to a proposed amendment as not being supported by the specification (i.e., on 112 grounds even though it was not a 112 rejection). See Tip #2.

Case B had an interview summary immediately prior to abandonment where the examiner objected to an argument that hinged on a limitation that was not stated in the specification (i.e., on 112 grounds even though it was not a 112 rejection). See Tip #2.

Case C had an initial objection to the specification for not describing the claimed subject matter (i.e., on 112 grounds even though it was not a 112 rejection). See Tip #2. Also, the examiner (same as for Case D) had a 61% allowance rate, which was the third lowest allowance rate for the art unit.

9. For The 1 Out Of 1859 Cases, Potentially Reconsider Your Strategy For Examiners Who Have A Significantly Lower Allowance Rate

Case D had a corresponding PCT application that was abandoned before US prosecution began, potentially signaling a change in the importance of Case D to the applicant. Case D was abandoned after the fourth office action with only one RCE in prosecution, where a reference initially used as 102(b) prior art became part of a 103 rejection. (Notice this is the first time I mentioned any issues relating to the prior art.) The examiner (same as for Case C) had a 61% allowance rate, which was the third lowest allowance rate for the art unit.

I look forward to your comments below! Thanks again to LexisNexis PatentAdvisor® and Innography® for providing the relevant data through their powerful tools.